Have something you think belongs in the Tech Archive? Post it here!

I posted this over on Moparts but thought I would post it here too if any member here doesn't visit Moparts.com

The reason I'm posting this topic is to explore the theory that the was a second V code car built and it was the 1972 Road Runner press photo car.

There is only one know 1972 Road Runner V code car (Mopars member Larry D's car)
I will post pictures of it here (I'm assuming that it's OK to post these pictures since Larry posted them here and on other Mopar forums before ... if not let me know and I will delete them).
Here is Larry's known Road Runner RM23V2G105346

The press photo car was photographed around mid-April 1971at Chrysler proving grounds (leaves on trees just stating to sprout and grass is growing). These photos were for release to the media before the 5 Sept. 1971 new car announcement.
The car is probably a 1972 proto-type model with a 1971 drive train.
Note the all red interior that was never offered in a 1971 or 1972 b-body.
Probably a test mock-up of styling designs.
The car has all 1972 exterior body panels and bumpers (with bumper guards).
Notice the standard Road Runner hood call outs are the plain reflective silver ones used on 1972 400 4v cars.
No 440+6 call outs anywhere or GTX emblems that were found on all 440 equipped 1972 RR/GTX optioned car.
Larryâ€™s car (I believe he said) had them.
This car has short style decorative exhaust tips used with resonator mufflers found on 440+6 cars.
This car is a 440+6 console 4-speed car â€¦ see interior photograph.

The photos of the engine bays in both articles are not the same engine bays.
One is from the 1971 Road Runner press photo car (EV2 440+6 car with standard hood and 440+6 hood insert call out that can be seen).

The other is from this 1972 Road Runner press photo car.

The engine bay have different batteries, brake reservoir caps, ignition wires, the 1972 bay is very dirty for a press shot I.E. road tested car â€¦ anything else different about them can you see?
Notice the writing on the power brake booster and battery.
The writing on the battery says â€œCAR # 065â€
The writing on the power brake booster says â€œCAR ???â€
Is there electronic ignition on these engine shots?
1971 style washer bottles.
Horn in the wrong place for 1972 Road Runners.
There is no kick down linkage for this car in the engine bay photo (a 4-speed car).
There is no fender tag or ever holes were it would have been screwed down to the fender well (pilot car).
This a 1972 Road Runner proto-type with a 1971 440+6 drive train?
Then is it a 1972 Road Runners with a 1972 vin number?
Do all Chrysler cars; including pilot, test and proto-type car get vin numbers to keep track of them?
I do not think this is RM23V2G100065 since it was built way before Aug. 1971 to be included in the sequence numbers.
What does â€œCar #065â€ mean?
Seems strange that there were a few built the first week of production (first built 8/1/71 and last built 8/7/71) and then no more were built by the September cancellation of E87 engines for 1972 production.

Great stuff! I notice both engines have the 70 and early 71 valve covers (no raised circle on the drivers cover front).
AKA Butterscotch71....the road runner nest is out to win you over this year! 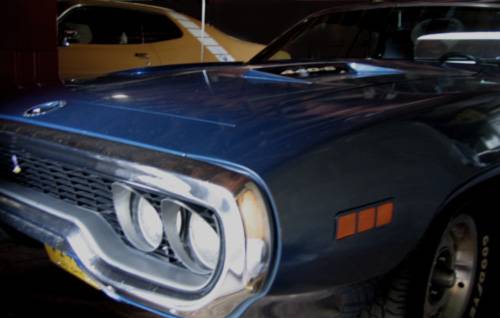 The engine photos with the car 065 crayon marks are from a road test originally done on a 1970 Challenger. They must have used the old photos for the newer article.

Thanks for that info!
I really need to find a engine bay press photo then to make positively sure it's this Road Runners engine bay then.
1972 Road Runner N96 EV2

Edited photo just in case anyone does not know?

Alaskan_TA wrote:Edited photo just in case anyone does not know?


Barry
71 B bodies I'm familiar with don't have a bump out, was this an E body only thing for 71? Attached is what a normal 71 drivers inner fender looks like

So it would appear on B bodies the changed happened for 72
AKA Butterscotch71....the road runner nest is out to win you over this year!

Id love too see a police interceptor of the present with a 440-6 in it! Great post!
______
-Tyler
"When everything's coming your way, you're in the wrong lane."
Top